Cocked, Locked, and Loaded: An Analysis of Five Policy Regimes of Concealed Carry on Campuses 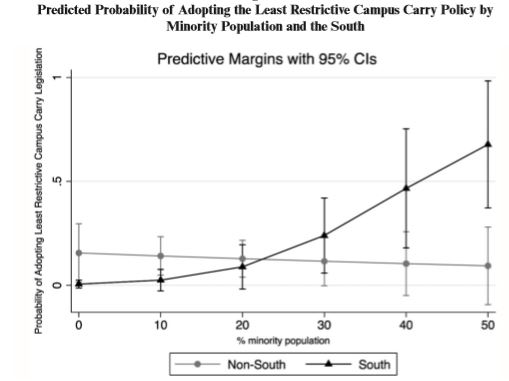 What are the predictors of the five types of policy regimes on campus carry across the 50 U.S. states? This study explores the roles of problem environment, gun culture, state policy liberalism, region, and racial politics to answer that research question. We argue that morality policy, the role of region in the adoption of public policy, and the southern subculture of violence are useful theoretical lenses for examining campus carry. We find that the problem environment—measured as gun murders per 100,000 population and the violent crime rate on college campuses—is negatively related to the adoption of campus carry policy regimes, while the gun culture (measured as gun purchases per capita and the total number of gun-related interest groups) is positively related to the adoption of campus carry. State policy liberalism is a significant predictor of the type of policy regime adopted across the states, and the interaction term of percentage minority population and the South is a powerful predictor of adopting campus carry. The findings highlight the extant significance of the role of region, but it is conditioned by racial politics in the case of campus carry. Morality policy suggests that the rapid spread of concealed carry on college campuses may have hit a ceiling.